It’s a Competitive Market: Finding Food, Home and a Mate

Resources for extending the learning

Large, high-altitude flocks of Canada Geese are passing through over the next half-month.  These are mostly the Northern subspecies of the Canada Goose, Branta Canadensis interior (see Late October for a discussion of Goose subspecies).

Unlike our Giant subspecies, these birds have declined in population, only recently stabilizing at a fairly low level (roughly 100,000 birds).  This has been mirrored by a rise in the population of Giants, and may be caused in part by increasing numbers of Giants flying up to James Bay to moult, and competing with the nesting Northerns and their goslings for scarce food.  This has been exacerbated by the destruction of salt marsh habitat by large numbers of Snow Geese, on the increase because of heightened food production in the U.S. Midwest. 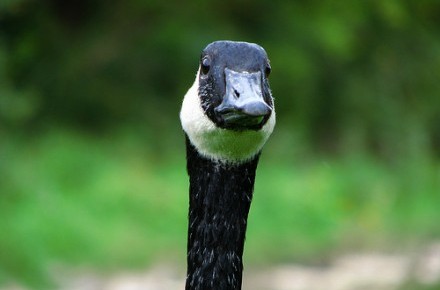